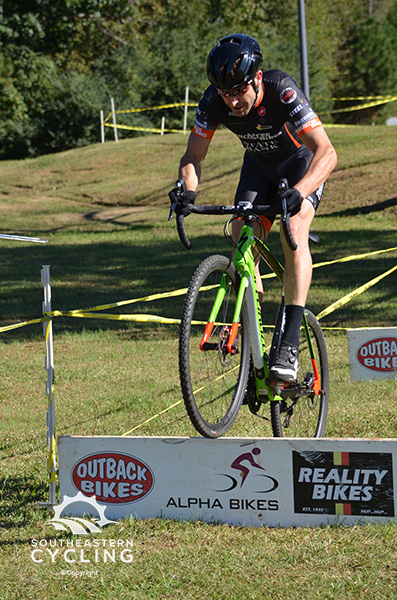 Chris Wyatt (Peachtree Bikes) was the only one to bunny hop the barriers at Boundary Waters.

Finally! The sun and beautiful weather came to the Georgia Cross State Championships. Racers were treated to an exciting, balanced course that favored a cross racer that had power, technical skills, and quick dismounts. There was a single barrier, a double set of fast barriers, and a “bunny hop” set of rail road ties. The rest of the course featured many turns, some fast straights, and a gravel corner that took its share of victims throughout the day.

The first State Championship jerseys would be awarded to the Cat. 4 Women and Juniors. In the Cat. 4 women, the first lap was a tight grouping with Carol Baldwin, Cambrie Epperson, and roadie Christine Grant (Mission Source-NCGA)  establishing a small lead over Kat Kadous (L5 Flyers) and Molly Russell (Spindle). By the second lap, Carol gapped Christine, who fell back with a mechanical problem and lost several places. Christine passed most of the riders that went around her but could not catch Carol, who took home her first State Championship jersey. Christine was second, and Cambrie was third. In the Juniors 15-18, Frazier Cycling swept the podium with Davis Branyon, William Nguy, and Blake Wilson taking the honors. In the Juniors 14 and Under, Reece Latham (Mission Source-NCGA) continued his domination and raced his way to the jersey. Troy Waine and Leon Waine of EPTC rounded out the podium.  The biggest Cat. 5 field of the year toed the line. Shane Sullivan (Fika Coffee) won followed by Tim Marshall (Incycle) and Jeff Moore (L5 Flyers).

Elite Masters always come out to have their chance at a State Championship medal. In the 40+, Wesley Garland put his stamp on the division the first few races. He would be challenged by his Peachtree Bikes teammate Chris Wyatt. Connell Patterson and Grayson Tudor were hoping to make it a Peachtree Bikes podium sweep. From the gun, Wes and Wyatt pulled away from the pack. Wes got the best of Wyatt on the flatter sections, but Wyatt made up time with his entertaining bunny hopping of the barriers. The crowd went wild every time he did so. In a virtual sprint, Wes took first with Wyatt in second. Nate Sibley (Atlanta Cycling) foiled Peachtree Bikes’ efforts and got third. The Masters 50+ race is usually a pretty close race with quite a few riders capable of taking the victory. At no point this year has anyone made a dominating win. That was about to change. From the go whistle, Dub Smith (Toyota Forklifts) went to the front, politely told everyone to eat his dust, and rode away from the pack.  Behind  him, Chris Isenburg (Mission Source-NCGA), and Toyota Forklift teammates Alan Burton and Lamar Mauney were in a battle for the remaining two podium spots. After trading jabs back and forth for a few laps, Chris got a gap for second. Alan grabbed the final podium step. Dub took a very well deserved win and the jersey. He was seen with it on the rest of the day, and rumor had it Dub’s coworkers were going to make him wear the jersey to work on Monday. 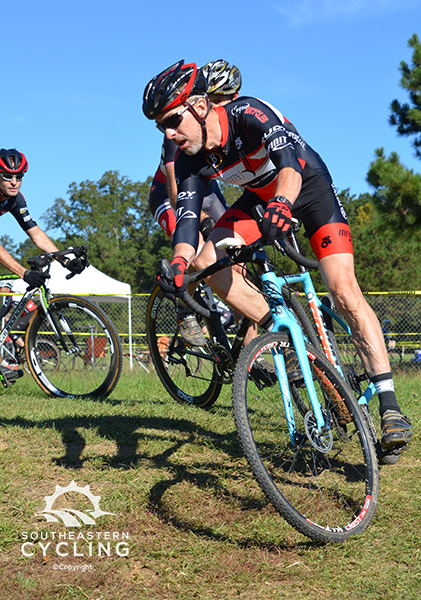 With a field of 15, the Elite Women took off in a cloud of dust. The flat start kept the racers together through the first set of grassy turns on the hillside. Eventually, Leigh Hopkins (Service Course Auto Works), Lisa Randall (Super Sport), Kim Blodgett (Atlanta Beltline Bicycles), and Peachtree Bikes teammates Shannon Greenhill and Paula Burkes got a small gap on the rest of the field. This group stayed together most of the first two laps. Leigh Hopkins went to the front on lap 3 with Shannon and Paula behind. Paula pulled to the front, Shannon would take the lead, and Leigh would chase for most of the next 2 laps until Leigh fell in the gravel corner after the railroad ties. This was all Paula and Shannon needed to put about 10 second into Leigh. Despite a valiant chase, Leigh could not catch the Peachtree Bikes duo. Shannon to the win with Paula in second. Leigh was third. In the Cat. 4s Michael Garisson (Mission Source –NCGA) took the holeshot but wiped out just before the off-camber switchbacks. Dan Podratsky (Prima Tappa) then came to the front. Murphy Davis (Toyota Forklifts) then put in an early, unshakable lead around the lake after his own wipeout.  Given the course profile several of the Cat. 4s chose to race their Single Speeds, including Murphy. He nabbed his first State Championship. Chad Conley (EPTC) came in with a strong second place, and Michael Garrison (Mission Source-NCGA) was third.

The anticipation for the Elite Men’s race could be felt through the crowd. Frank Treveiso (UHC-706 Project), Nick Van Winkle (Litepseed-BMW), and Arthur Sagat (Mrs. Roses) had been on each other heels the first two race weekends. The three quickly got away from the field and stayed together until two laps to go. Arthur took a tumble and fell off the pace. Frank put in a big effort with two to go and gapped Nick. Frank held on for the win by about 20 seconds. Nick rolled in for second, and Arthur was third. In the Cat. 3 Brian Feld took home the jersey. Connor Ardrey (Outspokin Augusta) and Tim Mondor (Alpha Bikes) rounded out the podium.

With Jeff Hopkins getting the boot up to Cat. 3, the Masters 4/5 race was wide open. Tim Marshall (Incycle) came out on top with Robert Conster (Reality Bikes Ambassador Team) in second with Jeff Moore (L5 Flyers) capturing another third place. All bets were on Dave Marbut (Toyota Forklifts) and Troy Dunton (DePaula Racing) to battle it out for supremacy in the Single Speed race. Early on they were joined off the front by Matthew Reeves (Loose Nuts). Matthew always does well on power courses, using his riding style to his advantage. The three swapped leads a few times. Further back in the pack, Mikey Waine came out to entertain the crowd with wheelies and other bike tricks. Other Single Speeders were slightly less serious about the race and enjoyed the pumpkin spice donut hole hand ups on the gravel climb. Back at the front, Matthew rode away from Dave and Troy on the final lap, cinching the coveted State Championship jersey.