Georgia CXer’s were finally introduced to cool fall weather this past Sunday during the sixth race weekend of the 2016 Georgia Cyclocross season. Peachtree Bikes hosted this weekend’s party with a CX race thrown in at the picturesque community of Serenbe located in Palmetto, a few miles south of the city limits of Atlanta. Serenbe is one of the most progressive and unique communities in the country. The Serenbe community focuses the well-being of its visitors and residents by combining business, neighborhoods, recreation and nature in a near perfect harmony. The community is surrounded by the rolling wooded landscape of the Chattahoochee Hill Country that the New York Times aptly called, “a utopian experiment in New Urbanism being molded out of Georgia red clay.” It has arguably become one of the favorite venues of the GACX series. 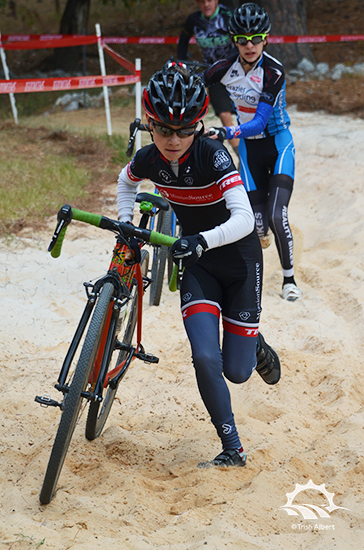 Reece Latham (NCGA) on his way to winning the Juniors 10-14 Serenbe CX race.

Weather and race conditions could not have been better with beautiful fall colors and cool morning temperatures greeting the racers, which warmed slightly as the afternoon progressed. This was long awaited respite from the dry blistering heat that GACXer’s have been exposed to all season. Rained threatened early however the Georgia drought continued and GACXer’ raced on a Serenbe race course was dry for the first time in three years! Dust! Dust has become the new mud at GACX! 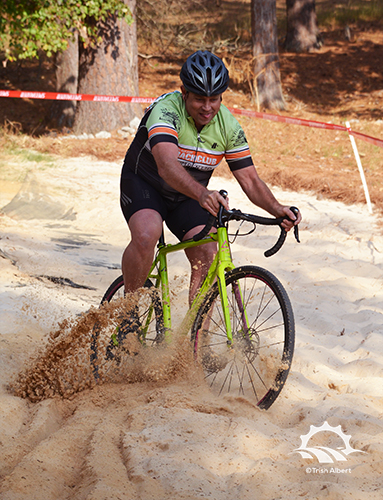 Michael Barman (EPTC) gets rad in the sand at Serenbe CX.

This year’s course, as in previous years, utilized the unique hilly landscape creating a challenging race course complete with tight technical turns, leg blistering climbs, sand, gravel, and a speedy descent to the tricky 90 degree turn on to the Yellow Brick Road. Over 160 racers were present with an abundant group of spectators and hecklers, which always add to the fun. The Sand pit was a favorite spot for spectators, hand-ups, and hecklers as it was the site of many a spill! The combination of the awesome venue and race course, beer, great food, and good ole CX camaraderie resulted in another successful CX weekend. Thanks to Peachtree Bikes! 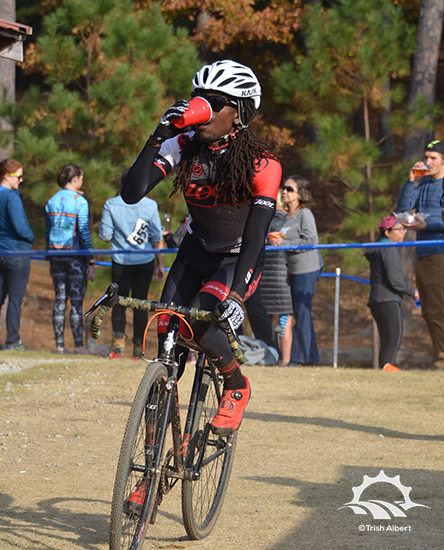