This past weekend cyclocross racers from across the state converged on the town of Pooler, Georgia for the 2016 The Savannah Superprestige Cyclocross Weekend. The SSPCX 16 races were held once again at the Oglethorpe Speedway Park, just north of Savannah. Despite the damage inflicted throughout the Georgia cost by Hurricane Matthew just two weeks prior, OSP appeared to come out of the ordeal unscathed. On closer inspection of the area however, it was obvious the damage had taken its toll on the venue as well the surround communities as piles of debris from the storm littered sidewalks and streets. Thanks to the OSP staf, and some hard work by Bryan Schoeffler and Justin Bristol the race course was ready and the weekend was executed without a hitch on a dry, fast, and exceptionally well laid out race course complete with the stairs and Corona Corner Fly-Over! Free camping, showers, and even a pub on site made for great venue!

Kinzer Hewitt (LNC) gets air over the flyover on Saturday. Photo by Ross Monckton.

Since it was Halloween weekend, CXer’s also had the opportunity between races to attend one of the many Halloween celebrations around the area. From the Pirate Weekend on Tybee Island, to the down town concerts and costume parties, to the popular Savannah Riverfront Crawl-O-Ween pub crawl, celebration opportunities were abundant. Not to be outdone, the SSPCX 16 added a bit Halloween flavor of its own with costume contests and a bit of eerie night racing for double points! 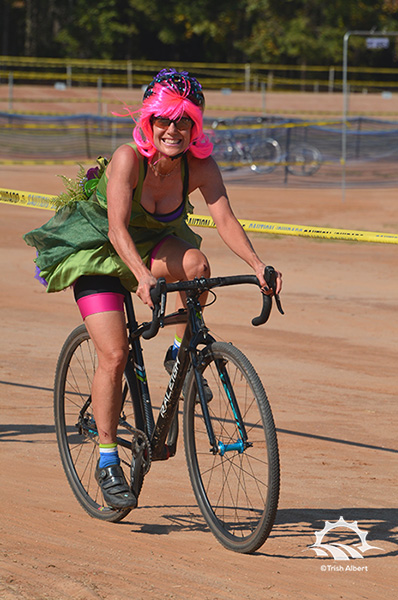 The Single Speeders had fun in Savannah dressing up for Halloween! Photo by Trish Albert/Southeastern Cycling

Despite the festive atmosphere and celebrations, when the racing began it was all business. The course although flat and fast, wasn’t without technical elements. Deep pockets of sand positioned randomly throughout the course meant strict attention had to be paid to race lines or precious seconds were lost or at worse complete wheel washouts and spills. Saturday night’s course was remained mostly on the flat portions of the race track and grass with only a short technical loop through the woods which was fortunately lit at night. Sunday temperatures climbed into the mid to high 80’s which added a level of suffering to races. Sunday’s course was slightly longer with a loops through the woods on either end of the course around where shade provided racers with a brief reprieve from the sweltering temperatures of mid-day. Most races on both days drew larger than normal fields and came down to the final lap with sprint finishes.

The Elite Masters 40+ coming into the barriers Sunday at Savannah. Photo by Trish Albert/Southeastern Cycling

Once again this year The Savannah Superprestige Cyclocross Weekend proved to be a great race experience and series favorite.