A gorgeous fall day greeted racers at Boundary Waters Park in Douglasville, GA. Now an iconic stop on the Georgia Cross Series, BW provides a beautiful venue for a cyclocross race. The Aquatic Center side-course remained mostly unchanged from the previous year. It started out in the field, made a couple of turns before going down a hill with several switchbacks. Riders went from full gas to half speed sharply. The course opened up again around the lake except for a single barrier to a short hill that interrupted things. Some slick pine straw turns led to the gravel hill. With no rain in weeks, at some points it looked like riders were coming out of dust devils as they emerged at the top of the hill. After turning right onto the grass, a short spiral slowed things down before another jaunt up the gravel to the final set of barriers. A nice, long finishing straight allowed racers to finish at full speed. Many called the BW track a “roadie course” and “darn fun” in the same breath.

A large combined field of Men’s CX 5, Women’s CX 4, and Juniors swarmed the start area. Categories had a 1 minute between them. Blake Wilson (Frazier Cycling) was overheard saying to teammate Harrison Nguy that they want to win Cat. 5 but may not be able to because of too much traffic.  Blake fought valiantly and finished inside the top 10 in the Cat. 5 Men and standing on the first step of the Juniors podium in the Juniors 15-18. He was followed by Harrison and Henrik Klessmann (NCGA). 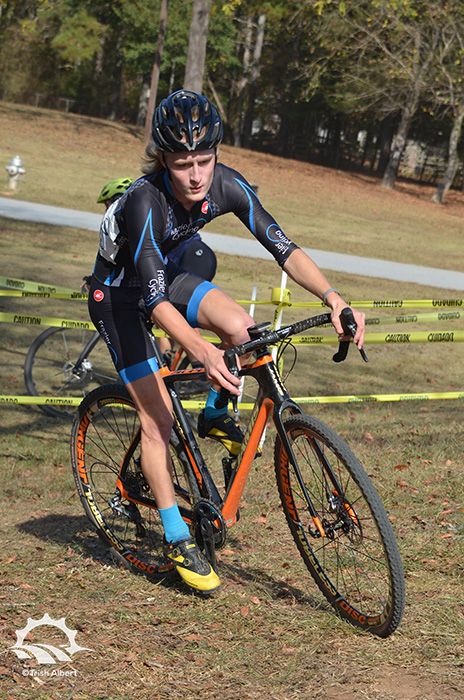 Seventeen Elite women took the line. It was noted by several of the fast ladies that this year has had the biggest women’s fields in quite a number of years. We love it! Jean Miller (Sorella Cycling p/b Hincapie Sportswear) took off the start line quickly followed by UCI Road Championship Junio Women’s racer Megan Heath (Frazier Cycling) and Sorella teammate Trish Albert. In the switchbacks, 706 Project teammates Leigh Hopkins and Maria Carrelli and Sorellas Brittany Hopson and Jenna Downey (Sorella) came around to the front of the field. Megan took a tumble, which allowed the five riders to pull away. Jenna Downey took the lead, but she did not want to stay there. Jean eventually faded, and the other four stayed together. The lead swapped a couple of times as racers played team tactics. On the fourth lap, Leigh and Brittany took the front over the barriers. Going into the fifth lap, Jenna got a small gap on Leigh and Maria. They would hold those positions until the finish. Brittany came across the line about 20 seconds back for fourth. 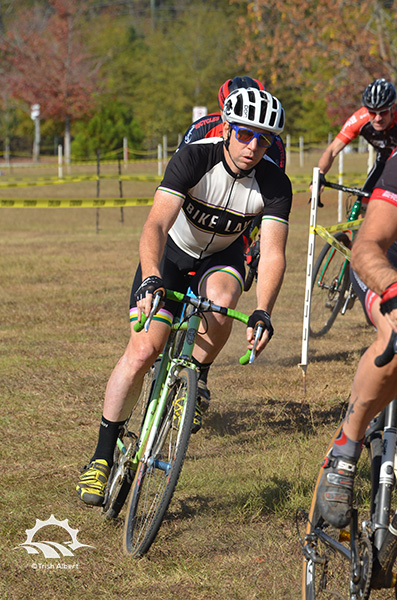 Three riders quickly broke away in the Men’s Elite race-Artur Sagat (SCAD), Frank Trevieso (706 Project), and Nick Van Winkle (Litespeed-BMW). A group of three chasers was never able to make contact. Artur, Frank, and Nick swapped the lead several times as they worked together on the flatter sections of the course. With two laps to go, Artur attacked and was able to get around Nick, who stuck to Artur’s wheel like glue. Frank was a few seconds back. About a third of the way into the lap, Artur gapped Nick out of a corner down by the lake. Frank passed Nick half way through the last lap and took second.

Maylyn Oswald decided to take a little break in the Women’s CX4 after a little bobble.